Star Power and Another Bike Ride in Maine

Looks like Joe Cupo has a little competition. Both great events and both for a good cause.

Too bad The Demsey Challenge conflicts with the Cadillac Challenge Century Ride. I can't decide which one I'd rather do more!!

Anyone sick of the trainer and dying for a real ride?

With temps predicted to be around 50-degrees Sunday it's very tempting.

Any takers? Leave the shop at 10am, ride the safety of Route 1 to at least Freeport, perhaps Brunswick, stop for coffee, and return the same way?

No hammering necessary. Just ride, enjoy the bike and the company of friends, with fingers crossed for an early spring.

What say you? (Comment here or send me an email.)

A few of us were successful in spreading a little holiday cheer last weekend.

Most of us dressed as reindeer, some might call us Antler People, with Tracey posing as Santa, complete with sleigh and presents. 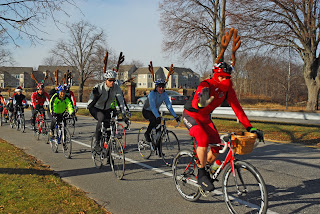 In addition to riding two-by-two around the boulevard we made our way to the Old Port and Arts District to wish shoppers a Merry Christmas. 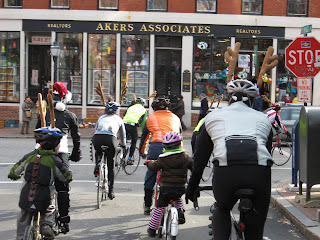 Of course we had to stop at the tree for a photo. 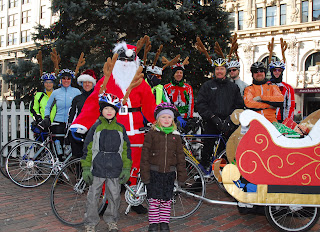 We were greeted with smiles, cheers, and honking horns (this time in a good way). It seemed we were well received and hope to make this an annual event.

Thanks to Richard, Paul and Don for taking great photos that I've posted on our Flickr site and to Rocky for shooting the video below.

A Letter from Santa

For those of you not involved with the Santa/Reindeer event that is taking place this weekend, and thus out of the string of emails going back and forth about said event, I thought I would share with you a message from our beloved Santa:

I have been very quiet concerning these weekend plans. Apparently I won an election. I have been nominated, elected, appointed, and drafted to be CCCP's "Santa Claus". I wasn't running for this role, and am not at all certain about accepting this unpaid position. At the very least, we should all go into this with open eyes, and all should be very clear about expectations.

First. Are you all out of your minds?

Second. I personally hold Tracey Merrill responsible for any and all damages or injuries to myself, or others around me, that may result from my operating a bike, wearing Santa gear, being pulled, I guess, in some sort of sleigh device put together by a couple of unsupervised kids. This is an accident waiting to happen. I want a complete film record of this mess; to be used as evidence in any subsequent legal proceeding. The last thing I want to do on Dec 6, is show up at a local emergency room, with a broken collarbone, wearing a bad combination of biking attire and a Santa Claus outfit, and having to explain what exactly I was thinking of, and being forced to take a sobriety test, for obvious reasons. And let's remember this. If I show up at that emergency room, with probably seven or eight more of you, all of us injured and maimed, blood flowing freely, spoiling our holiday and biking attire, we are making national news; I'm thinking The National Enquirer, The Drudge Report and any other tabloid wanting to have more fun at the expense of cyclists

Third. No one is getting on my lap. No exceptions. Don't even ask. Just because I'm sitting, isn't a reason to be jumping onto my lap, throwing a wrestle hold around my neck., and reciting your list of god awful trinkets that you want me to deliver on XMAS eve.

Fourth. No photos, or a least no photos linking me to this event. Any photo captions are to list Claus as being played by Will Ferrell. The sun glasses will stay on during the entire time I am wearing anything red colored and fur lined.

Fifth. Their will be only one single, very short, and not very loud "HO HO HO". I will determine when that single HO HO HO is said. Pay attention, Otherwise, this Santa is mute, and I will have the ACLU in your face should you ask for more. A mute Santa Claus is perfectly acceptable and politically correct. My version of Santa is best played by Bela Lugosi, not Tim Allen.

Sixth. This is most likely not a family event. If any of you are inclined to bring drooling and obese children looking for Photo Ops, go to Macy's. Most children are scared of me, and my wearing a dime store Santa Claus outfit, will be a horror movie event. XMAS is not a time for terrorizing your kids. Keep the kids at a distance. Explain "Santa Claus is sick today, he can't talk, and had a tough Friday night". Throw in something about Santa being seen leaving Forest Gardens early in the morning. Tell them Forest Gardens is a rehab center. Confuse the hell out of them, and start lecturing them about substance abuse. XMAS time is the right time to introduce your children to a dysfunctional Santa. This whole thing is beginning to sound like a good idea.

Are we all set? Now, How do I get into these damn, fur lined, red pants?
If someone else wants this mess, it's all yours. Anyone want a recount?